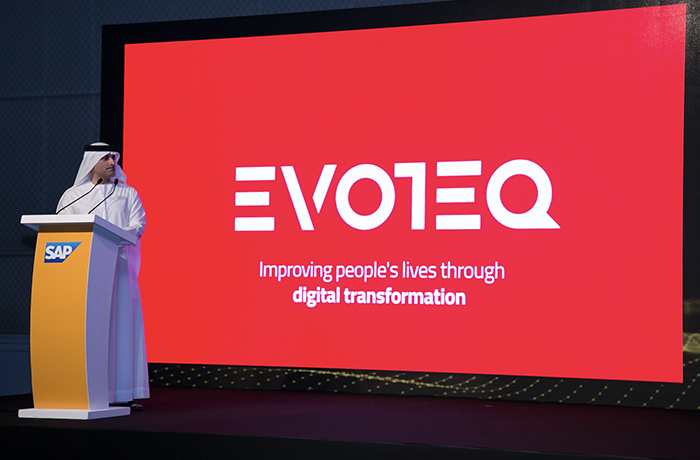 Bee’ah, Sharjah’s pioneering environmental management company, has announced the launch of a new company, EvoTeq, and signed two new business agreements in its quest to deliver innovative tech-based solutions to combat pressing issues faced by the region.
The signing ceremonies and announcements took place during Bee’ah’s participation in the SAP Innovation Day, taking place at the Al Jawaher Reception and Convention Centre in Sharjah.
During the event, Khaled Al Huraimel, Group CEO of Bee’ah, announced the launch of EvoTeq, a digitally focused company that will employ technological solutions to address logistical, educational, healthcare and other complex issues faced by the region. Under the umbrella of EvoTeq, two new business initiatives, Evogulf and SmartTrack were also announced.

Since its inception, Bee’ah has prided itself on improving the lives of people in the UAE, first through waste management and subsequently, through a process of holistic environmental management, catering to air, water and energy. In all its ventures, Bee’ah has utilised technology and innovation to great advantage. In addition to launching the revolutionary Wi-Fi bin, Reverse Vending Machines and an integrated mobile app, cutting-edge technology like geo-tagged smart bin sensors and automated route optimization are utilized through the company’s advanced fleet management and monitoring system. Innovation is also vital to Bee’ah’s future; materializing in the form of its new Headquarters, which was designed by Zaha Hadid and aimed at achieving a LEED platinum certification.

The growth of a digitalised society has inspired Bee’ah to diversify its offerings and utilise its role as a catalyst for change, in driving the process of digital transformation, in an ethical and sustainable manner. Elaborating on the operations of Evoteq, HE Salim bin Mohamed Al Owais, Chairman of the Board of Directors, Bee’ah, said: "The launch of EVOTEQ, is a proud day in the evolution of Bee'ah. We have always been believers in Technology and Innovation and pride ourselves on being the most advanced company in our industry. With that focus on innovation and on quality of life, we knew that technology has to play a big role in the future of Bee’ah. The time is perfect to diversify into the digital economy and launch EVOTEQ which will help improve the lives of the people we serve."

From his end, Al Huraimel, Group CEO of Bee’ah, said, “Signifying a new venture for Bee’ah, EvoTeq will focus its efforts on the digital transformation of the public and private sectors here in the Gulf region, seeking to improve people’s lives by applying digital technology to everyday situations. In practice, this means we will strive to enhance existing digital platforms, create new e-commerce services and act as an enabler and facilitator for the rapid, ongoing process of digitalisation within the Gulf.”

The day began with the signing of a memorandum of understanding between the newly formed EvoTeq and SAP, the German software giant whose products seamlessly connect people and technology in real-time. A global software company, SAP is one of the largest vendors of ERP and other enterprise applications, driving the process of digital transformation, and serving more than 335,000 customers, across 190 countries. The agreement will be conducive to ensuring the smooth launch of the company and in establishing its operational efficiency. It will also develop its digital business on the latest computing architecture including mobile, Cloud, Big Data and analytics.

The ceremony was followed by the signing of a second agreement between EOH, a leading consulting, technology and outsourcing business from South Africa, and the newly formed EvoTeq, to from Evogulf; which will function as the implementation arm of EvoTeq. Operating under EvoTeq, Evogulf will utilise the expertise of EOH, to ensure the smooth implementation of digital solutions developed by the company.

Tayfun Topkoc, Managing Director, of SAP UAE said, “We are delighted to sign this agreement with EVOTEQ to co-innovate and develop citizen centric digital services to improve the lives of people across the region using SAP latest technology innovations. EVOTEQ is embarking on an exciting digital journey that will provide easy access to real-time insight to support better citizen services”.

EOH provides high value, end-to-end solutions in technology, knowledge, skills and organisational ability, to its clients in all industry verticals. Their vision for sustainable transformation is in alignment with EvoTeq’s targets for the future, thus maximising the efficiency of this partnership.

For EOH, Ertan Yorganci Global Head Utilities & said. “This is an exciting partnership which will see us collaborating closely with EvoTeq across a range of challenges and spheres of operation. We are looking forward to the partnership being both a successful and a fruitful one in the weeks, months and years to come.” Director Middle East

EvoTeq’s preliminary offering will be a unique digital platform called SmartTrack, which will tackle the challenges of drug counterfeiting, within the pharmaceutical industry. This innovative solution will support governments in the pursuit of a secure healthcare system and ensure the authenticity of pharmaceutical products at all touch points of the supply chain.

Powered by SAP, SmartTrack follows a live tracking system that starts with ensuring that all government-authorized drug manufacturers receive an internationally certified GS1 barcode. Emanating from an encrypted digital platform, these barcodes are insusceptible to counterfeiting and will provide details of the production date, location, batch number, and manufacturer of the pharmaceutical product. When the product is scanned, SmartTrack will inspect it against its secure database to ensure legitimacy.

As the application is implemented at all strategic points of distribution, the entire supply chain can benefit from identical verification services. This holistic approach also makes it easier to analyse the chain for points of weakness which can be duly dealt with by law enforcement officials.

Through the provision of a mobile app, SmartTrack can also be used by patients directly, to ensure the authenticity of the drugs they purchase.

“The range of benefits that SmartTrack offers are undeniable,” said Al Huraimel, “The supply of counterfeit drugs by illegal agencies have contaminated the legitimate supply chain for too long, and put countless lives at risk. Through the application of SmartTrack, the pharmaceutical industry will finally be able to acquire actionable data and curb these activities to ensure the well-being of people. This platform can also help to identify shortages and over-supply in the supply chain to ensure that drugs are available when and where they are most needed.”

The first of many disruptive solutions being designed by Evoteq, SmartTrack will reform the healthcare industry through close monitoring, and by ensuring higher standards, to create a better healthcare ecosystem.